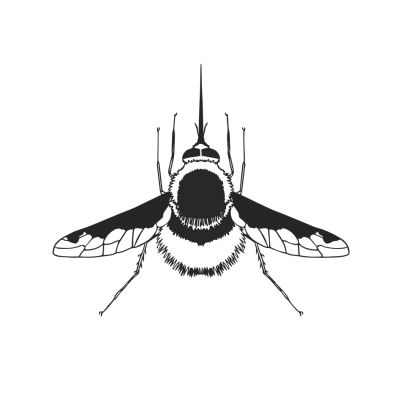 Bee flies (Bombyliidae) are fewer in species compared to hoverflies, nevertheless they are keen visitors to flowers and some of them important pollinators. Their name reveals their appearance –they look like bees, due to their hairy body and in fact some of them are bee mimics. Most of the species are parasitoids of other insects, suggesting that their larvae do not depend on flowers; the adults of many species do, however: their mouthparts modified for sucking nectar from deep flowers may be as long as four times the length of the head of the insect. Consequently, the proboscis constitutes the most prevalent characteristic of the insect, which together with the discrete colouring of the wing venation and their whirring sound while flying, make the bee fly easy to spot and to recognise.